Just A Bunch of Little Old Ladies? Not! 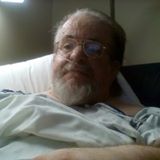 Brian Bennett was an active member of the Order of St. Peter in Chains, writing letters to encourage incarcerated men at Lawrence County Jail despite great suffering, literally until the day he died.

The final words a close friend living in a nursing home said to me before he died were, “I love you, Father Chris.”  He was a man who took his mission seriously.  Even on the day he died he wrote a letter to a Lawrence County Jail inmate to support the ministry of Fr. Franklin Sanders, Rector of Christ our Hope Anglican Church in Westpoint, TN.  This is what real men do.

Last week, also in the nursing home, I anointed four men with oil.  One of them is a really good friend.  He has a deep voice, and his eyes light up when, after every prayer time each week when I anoint him with oil, he smiles saying “Go Bucks!”  In his wheel chair, which he insists upon propelling with his own massive arms, he seems like he probably was a linebacker way back when.  When he rolled through the doorway he turned around and said in a loud voice, “I love you, Father Chris.”

Three more men asked for me to pray for them that day and all three, without any timidity, told me they loved me — “I love you, Father Chris.”

My point for this post is not to tell you how loveable I must be.  Rather,  I write about these men who say, “I love you…” because they break a stereotype we might carry with us that people in nursing homes are unable to articulate their love for others.   They also break another stereotype that seems to have permeated our culture that tells us that nursing homes are filled with little old white ladies.  While there are mostly little old white ladies today, the reality is our demographics in nursing homes are shifting just as they are everywhere.  Before long, the visions people have of frail old ladies as the “typical” nursing home resident simply will not be based in fact.

So when you walk around today or tomorrow and see people around you, consider the reality that one of every three women you see, of every age, will spend at least six months in a nursing home during her life; and one out of every six men will too, even the big linebacker types who should be playing in the NFL.